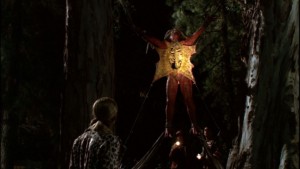 Adam, a variation of Frankenstein’s monster (a techno-demon-human-hybrid), brought to life by the demon-fighting secret military organisation “The Initiative”, is killing humans and demons in Sunnydale. “He’s studying biology. Human, demon – whatever he can get his hands on and tear apart”, explains Buffy.

After Buffy and her gang have found one of Adam’s ‘biology experiments’, a disembowled demon, in a tree, Willow characterises their find as Adam “making performance art out of other demons”. This remark has no particular relevance for the story, or for performance art, but it illustrates that, in 1999, such a reference to performance art as a violent cultural practice would make sense in a show that was famous for its pop-culture references.

However, it is interesting to speculate whether the line about performance art factored into the design decisions for the demon corpse and the way it is displayed:

This is from 2012. 2 Broke Girls is a sitcom about poverty and class. The two broke “girls” that give the show their title are Max, who was born poor, and Catherine, who was rich but now is poor because her dad got caught running a Ponzi scheme. Both are working as waitresses in a diner, and this is where the following scene takes place:

[A short summary/transcript of the dialogue:

Caroline: “Max, I can’t wait to go home and illegally download that documentary about performance art.”

Caroline: “But first, you have to see this. Her name is Marina Abramović. In the 90s she and her boyfriend did this piece called Confrontation where they just slapped each other’s faces for days.”

Max: “Oh yeah – my mom and her boyfriend did that too but they called it Who Smoked the Last Cigarette?”

Caroline: “No really, it was pure art. She’s a genius.”

Max: “How about you and I do a little art right now?”

Max slaps Caroline. Caroline slaps Max back. They keep going for a while, laughing about it at first, then it becomes more serious.

Two other characters, Han and Oleg, comment from the kitchen:

Han: “What are they doing?”

Oleg: “I think they might be doing a scene from Fifty Shades of Grey.”

The scene goes on for a bit longer and only ends when Caroline retreats, exclaiming “Ok, stop!”, and Max remarks, after having slapped her one last time: “That’s for suggesting we make a lypsinc video to Call Me Maybe!”

There are a couple of things worth noting here:

Firstly, the short scene presents us with an index of some of 2012’s most popular cultural products: the reality show Here Comes Honey Boo Boo, the bestselling novel Fifty Shades of Grey, and the summer hit Call Me Maybe. And Marina Abramović, who comes to stand in for performance art in general here, performance art incarnate, as the “documentary about performance art” must actually be the film The Artist Is Present about her work. Performance art / Abramović / the documentary (or, respectively, the MOMA show that gave it its name) do not operate on quite the same level of popularity here – they still have to be introduced as something to look out for, but their inclusion in this index, in 2012, in the context of a popular sitcom, seems nothing out of the ordinary. Futhermore, even though performance art is made fun of here, it is introduced as something that a lead character in the series is passionate and excited about – and this is one aspect that differentiates this reference to performance art from many other, earlier examples of performance art references in TV series.

Secondly, it is not by chance that it is Caroline who gets excited about performance art. In contrast to Max, the “authentically” poor character, who would rather watch (or only knows about) Here Comes Honey Boo Boo, Caroline, who is only poor because her dad got caught, used to move in the same circles as Sex and the City‘s Carrie, which means that the short scene also depicts (and probably reaffirms) perceived class distinctions. The appreciation of performance art – even if its medium is an illegally downloaded documentary – is thus clearly portrayed as an upper-class attribute.

Thirdly, the categorisation of an activity as art is here (rightly) depicted as a matter of context or framing. If the poor – “mom and her boyfriend”, that is, because the poor of course have broken families – slap each other, it’s not art. If Marina Abramović and “her boyfriend” do it, it’s “pure art”. But what about the activity that Max and Caroline engage in after Max suggests “How about you and I do a little art right now?” The suggestion should probably be read as insincere, as a pretext for slapping Caroline, but it could also be said to establish the frame for their activity as a piece of art, an activity that attracts the attention of at least some spectators (the characters of Han and Oleg), who misinterpret what they see, but not completely, as they interpret it as “doing a scene”, as some kind of performance, at least. Add to that the obvious joy that Caroline and Max at least initially seem to experience, demonstrated by their facial expressions and laughter, and the fact that they keep going for 16 slaps (16 do not seem that many slaps, but also an excessive amount of slaps for a joke) – these aspects make it hard to pin down what the nature of their activity really is. At the very least, even if this might not count as “pure art”, it could be characterised as “trying out” performance art. In any case, there is a compelling difference to Abramović’s and Ulay’s piece. Abramović and Ulay appear unmoved as they slap each other; the dynamics and speed of the slapping shifts (I have not seen the full video, but my impression of the excerpts I could find is that there is a certain logic of escalation at play in their performance), but their faces remain mostly void of expressions, which seems to be in line with the conventions of (some) performance art. In contrast, Max’s and Caroline’s reenactment is characterised by a combination of seriuosness and playfullness – rather than following a score, they are still trying to figure out the appeal and the meaning of the slap as they slap each other.

Fourthly, 2 Broke Girls gets some things wrong about the original performance: it was not called Confrontation, it was not performed in the 90s, and it did not go on for days, but “until one of us stops” (in the video version that is between six and ten minutes – accounts vary). Abramović’s and Ulay’s piece is from 1977/1978 (there was a public performance in Cologne and a video version produced in Amsterdam a year later), and it is actually called Light/Dark. These facts are easily obtainable, which leaves us with the question if the mistakes are due to carelessness, of if they might constitute an attempt to make the piece more relatable for the show’s viewers? Confrontation seems a more easily comprehensible title for what goes on in the performance, especially considering the fact that we are not provided with information on the specific lighting situation of the original performance (each performer’s face lit by a single lamp in an otherwise dark space, presumably), which is relevant information considering the title Light/Dark. The 1990s, of course, are the time when the “two broke girls”, now in their twenties, would have actually been girls, and 90s (rather than 70s) retro does feature elsewhere in the show. And finally, slapping each other for days rather than minutes makes the story more exciting; it actually adds to the piece; it could have happened. And it shows that rumours are an important medium for performance art’s circulation after the event, for how performance art resonates across time and space, and on TV.

We are currently doing a two-month residency at Fleetstreet Theater in Hamburg. Our starting point is the construction of two archives: an archive of “Performance on TV” and an archive of “Art after the End”:

To start with, we will pursue these two inquiries separately, but a hint at how they might be related can be found in a text we have written a while back: How to Prevent the Apocalypse with Performance Art.