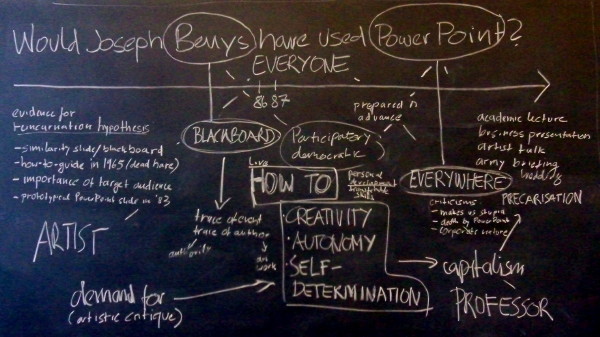 Microsoft Powerpoint: a brand name has become a synonym for a presentational format that shapes the way knowledge is communicated in almost all branches of society today, from the academic lecture to the business presentation to the artist talk. While on the one hand criticised for allegedly simplifying complex issues, Powerpoint is also described as “participatory and democratic”. The importance of these attributes has – at least since the 1960s – also often been emphasised for artistic practice. Joseph Beuys’s well-known dictum that “everyone is an artist” is paradigmatic for a desire shared by many artists at that time: to achieve a democratisation of art (and, ultimately, society) by collapsing the boundaries between art and life. Like many of his contemporaries, and many artists again today, Beuys appropriated pedagogical formats in his work. But how is knowledge communicated differently in Beuys’ blackboard drawings and in the bullet-point lists of many Powerpoint presentations? If in cognitive capitalism knowledge is considered a resource, how does this changed status of knowledge affect artistic strategies that aim to critically explore questions of knowledge production and communication? If participation and democratisation are allegedly already achieved through the technologies we are using, what is the role and status of art in this context? Would Joseph Beuys have used Powerpoint?
By performatively engaging with the technology it discusses, the Powerpoint presentation, this presentation aims to reflect on the changing relations between knowledge production, art, business and technology.

This video documents the performance of Would Joseph Beuys have used Powerpoint? as part of the Salon Suisse event Talk Was Cheap! The Rise of Performance Lectures, Palazzo Trevisan, Venice, 14 June 2013.